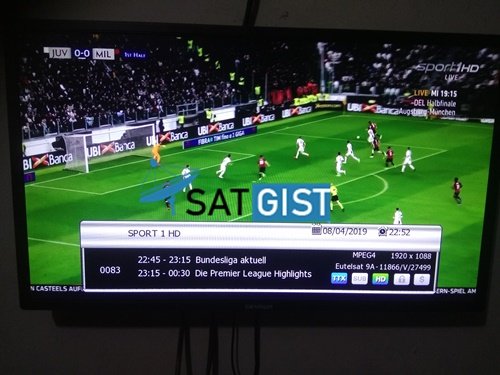 Both M4 Sport And Sport 1HD Germany showing Uefa Champions League And Europa League, the quater-final and semi-final draw to know which team to make it Madrid and Baku 2018-2019 Season. It was very difficult to watch Tuesday matches as there’s no free-to-air to show except Wednesday matches, However, M4 Sport HD and Sport 1HD on Eutelsat 9A at 9e will be showing Uefa Champions League tomorrow and Wednesday likewise to Uefa Cup too through cccam Server.

You may be hearing cccam for the first time and even some may even willing to know how it works just following me as everything will be covered on this tutorial.

What is Cccam Server?

Hence, Cccam is a kind of server protocol or card sharing method that could read and access the contents of subscription cards via local network or wi-fi internet.

Disclaimer: Please take note that using card sharing is not ilegal as long as it been used by the legitimate subscriber but selling or reselling the kind of service make it illegal and such people will be penalized according to the law. Any information found on this web page or website as a whole are strictly for education only as I’m not willing to promote or engage in selling any kind of service.

Not only the Champions League and UEFA Cup you can watch on M4 Sport And Sport 1HD, You can still watch NBA, German Bundesliga, Cricket, women basketball, International Football Friendly, European Qualification, World Cup and many more.

Requirement To Watch M4 Sport HD And Sport 1HD On Eutelsat 9A At 9E:

After you have familiar with the requirements and how cccam work, Let’s proceeds to how you can manually enter cccam parameters to any receiver as follows:

How To Manually Enter Cccam Server Into Any Receiver

M4 Sport HD and Sport 1HD Channels are working Eutelsat 10A at 10e using cccam server, If you are football fans and willing to watch Champions League and Uefa Cup, Eutelsat 9A at 9e is the best satellite for you with English commentary like wise AFN Sport on the same position will show it. Don’t forget to share this article o your friends and across social media

SatGist is a newly launched website which aimed to bring new ideas and sharing information on Satellite tv. Tutorials guide on Satellite tv, IPTV, Phone and Gadget review shall be emphasizes.