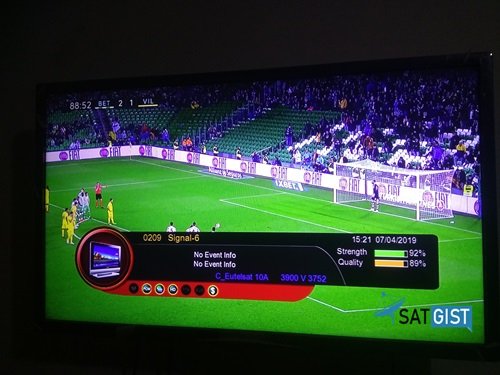 Eutelsat 10A at 10e seems to be worthy and a must a have for every footy fans most especially Spanish LA Liga, Italia Seria, German Bundesliga and French Ligue 1 to watch your live football club matches on Signal-6 using Biss Key, CIStv, New World tv Sport 1 and New World Sport 2.

To be honest, Eutelsat 10A at 10e offers movies, Music, Educations, Series, Kids and Documentary with at least 90% of the channels are french speaking.

The footprint cover almost all the South-East region of Africa as Startimes Mozambique also available on Eutelsat 10A at 10e with few Startimes channels are currently working as free-to-air.

CIStv is a senegalese based television service operate on Eutelsat 10A at 10e and a french speaking channels offers both local and foreign news and Movies, showing local football league, broadcast live Italia Seria, TV Shows and many more. It is absolutely free-to-air channel.

Spanish LA Liga is very much important for LA Liga footy fans and there’s not concern about them watching any other league most especially Barcelona and Real Madrid. Signal-6 or Signal-3 are feed channels i.e the channels that are used for either re-transmitting or temporarily working and it may be encrypted or free-to-air but both aren’t commonly working at the same time except when there’s two LA liga at the same time so that both Signal-6 and Signal-3 will be used to broadcast different matches at a time.

Both Signal-6 or Signal-3 are encrypted with BISS Program to secure the channel despite the fact that there’s tons of digital satellite tv receiver that can opening the channels via manual key or via Autorole BISS features program that detects the key by itself such as Tiger T3000 Mega, Tiger T3000 Extra and many more.

Frequencies Of Signal-6, CIStv And New World Tv On Eutelsat 10A At 10E

Requirement To Needed To Track Eutelsat 10A At 10E

How To Track Signal-6, CIStv And New World TV On Eutelsat 10A At 10E

Signal-6 or Signal-3, CIStv, And New World TV on Eutelsat 10A at 10e give you everything that quenches your taste for the time of relaxation on Sport, Movies, Music, News, Magazine e.t.c. Don’t forget to share it with your friends and across social media thanks see you later.