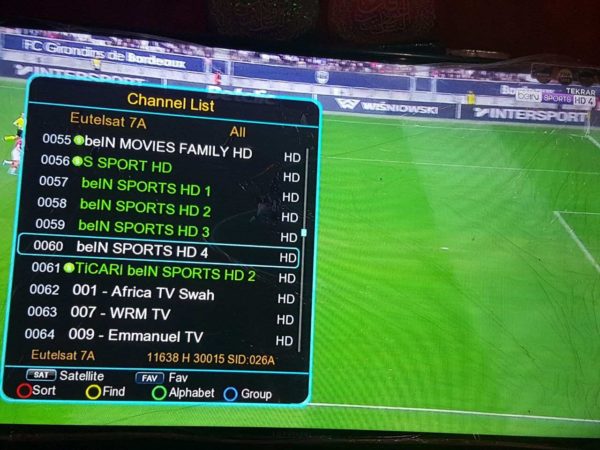 In the North Africa, the story change as Digiturk’s TRT Sport while S Sport HD belongs to Feed Sport Channel, just NHL Feed channel on SES 4 at 22w. Other African countries can manage to watch MBC Rodrigues i.e MBC TV1 and MBC TV2. Others free-to-air on Eutelsat 7A at 7.0E are Peace TV, Winners Chapel International, Emanuel TV and Saudi-Quran. In this tutorial, I will teach you how to install your dish to Eutelsat 7A At 7.0E. The frequency, satellite coverage and every other thing you need to know will be well detailed.

Eutelsat 7A At 7.0E Satellite Coverage

According to Lyngsat on Digiturk’s TRT Sport and S Sport HD, the beam coverage touches few countries in North Africa most especially Egypt, Ethiopia, Sudan. While Kenya people can also get the bird easily at least minimum of 60cm dish.

Eutelsat 7A At 7.0E is basically meant for European and some countries in MENA. United Kingdom, Germany, France, Portugal, Spain, Turkey, Italy, Poland and some others countries also favorite to get the signal easily. Likewise in MENA, Iran, Iraq, Afghanistan, Saudi Arabia are also favorite to get the signal on Eutelsat 7A At 7.0E. using 60cm dish.

In Sub-Sahara African which includes Nigerian, Ghana and others can only get that of MBC TV1, MBC TV2 and others free-to-air channels with minimum of 85cm dish above. However, you can use wide band dish antenna if you want to get Digiturk’s TRT Sport and S sport HD feed channels. For more details about the satellite coverage visit lyngsat.

Digiturk’s TRT Sport On Eutelsat 7A At 7.0E

Digiturk Sport was a Turkish TV channels before the Bein Media completes a mega deal to buy the company in 2016. The Bein Media has equipped the company with the latest technology equipment for both the coverage and delivering of digital TV services. The Bein channels been added on the package on high video quality.

S Sport HD is a feed sport channel currently working on Eutelsat 7A At 7.0E. It also covers many sport events most especially football. Though you need to updates the Biss code when due to updates the channel, don’t worry Icone Iron Pro or Icone Iron Plus or Tiger T3000 Mega will get you cover.

Free-to-air Channels on Eutelsat 7A At 7.0E

How To Track Digiturk’s TRT Sport And MBC TV On Eutelsat 7A At 7.0E