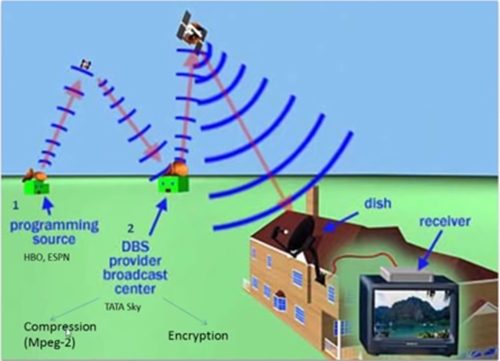 Hi guys, In this tutorial, I will be discussing with you the introduction to Satellite tv guide which will includes the basic knowledge of satellite tv with an appropriates illustrations. You may be wondering how does satellite dish antenna receive signal from the sky and to the receiver. Don’t worry I will get you cover, by the end of this tutorial, you understand how satellite tv work! very interesting.

What is Satellite TV?

according to wikipedia, Satellite TV is a service that delivers television programming in digital form to the viewers or subscribers through the implementation of communication, satellite revolving round the earth and directly to the receiver in their respective homes.

How Does Satellite Dish Works?

Now lets take these keywords one after the other to explain the basic knowledge of satellite tv guide.

These can be found on their respective satellite such as Eutelsat 36A for DSTV for sub-sahara Africa, Express AMU1 for Asian countries according to lyngsat and south-east Africa, Nilesat 7w For Bein Media, Amos 4w for Yes tv and so on.

For instance, DSTV or Multichoice receives signal from skysport for their live matches contents through the skysport satellite and modify it by branding, compressed and encrypt the signal before rebroadcast to their respective satellite.

And that’s the reason why Dstv or TATA Sky and other big digital tv service provider encrypt their channels because it cost them huge amount of money to have the rights to the live contents from skysport. To get their money back, the company needs to secure the channels to their subscribers only.

The functions of satellite dish is to receive signal transmitted by the satellite as follows:

Satellite dish antenna are of two types which as follows:

The Main functions of feed horn as you can see in the picture above are follows:

Normally, Satellite signal can be received via LNB in two ways which as follows:

Here is the typical example of satellite dish commonly used for most of the installation across the world below:

I hope you gain one thing or the other from this tutorial. If someone ask you that how does satellite tv work? then, you can refer to my post. I hope you enjoying it and if have ideas to share with us don’t forget to contact us or leave comment below. And don’t forget to share it with your friends or on social media.