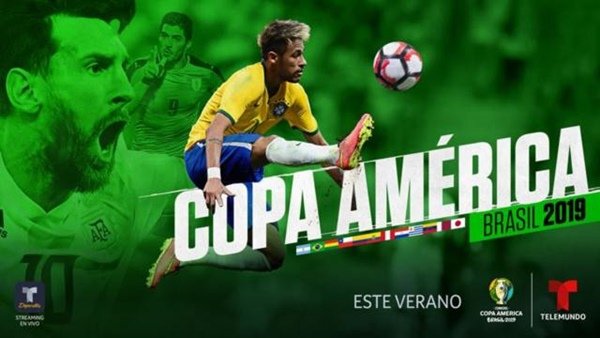 The Opening Ceremony of the 2019 Copa America is around the corner as the event will be kick-off tomorrow June 14 at Estadio do Morumbi in Sao Paulo in Brazil. However, The Final match will be played in Rio de Janeior on July 7, while the Third-place play-off will be hold on July 6 in Sao Paulo. I’m here to get you cover on how to watch 2019 Copa America Live on TV and Online Streaming.

How To Watch The 2019 Copa America

In Sub-sahara Africa which includes Nigeria, Ghana, Kenya, Gambia and others can have access to watch 2019 Copa America on DStv, Canalsat+ and StarTimes, You have to be on the premium package on DStv and GOtv Max Package on GOtv Cable Network, Similarly, You can subscribe for Sport package only on both Canal+ and StarTimes.

Premier Sports is the official TV to live telecast all the 26 games in the United Kingdom available on Sky or Virgin Television packages or via Online Streaming with Premier Sports App. Premier Sports offers a month subscription 9.99 pounds per month. However, New customer can sign up and get a month free trial to watch 2019 Copa America.

In North Africa and Meddle-East, You can watch 2019 Copa America games live and exclusive on Bein Sport Max Channels and Live Streaming on Bein Connect. If you subscribe to bein sport packages for a month and you will get additional 2month to watch free.

You can signed up for free on the following sites and enjoying free trial to watch 2019 Copa America:

You can stream more secure while watching 2019 Copa America by using a VPN Service. There are tons of VPNs available through the internet but the best of them is IPVanish support almost the devices with Internet facilities.

I strongly advice you to purchase premium VPN like IPVanish if you want to use anyone of the free streaming Services Apps. Likewise You can stream and watch 2019 Copa America Live and exclusive on official streaming services without the necessity of VPN Services and Satellite TV providers stated above or purchase MYHD IPTV activation code if you have supported devices like Android TV boxes, Tigerstar and mediastar receivers.