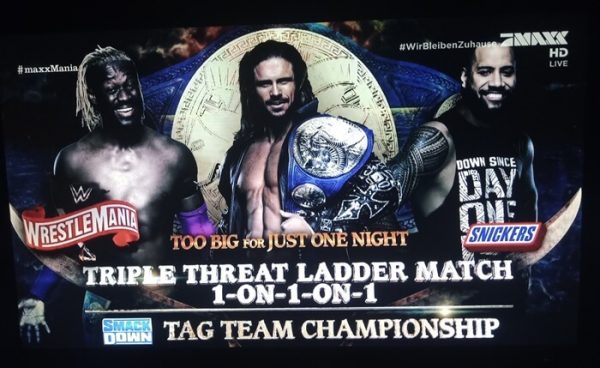 The WWE Wrestlemania 2020 is live on Zmaxx HD channel on Eutelsat 9A. The wrestling fans around the world will be become witnesses to history. The WrestleMania event will be hold on Saturday and Friday Night without spectators because of Covid-19 pandemic.

The event will a tag “too big for just one night” and hold 16 matches. There are many matches to watch, but a specific card order schedule has not been announced yet. In this post I will guide you how to watch WrestleMania live on Zmaxx HD channels via satellite tv. Also live stream from anywhere, no excuse to miss the show

The WWE WrestleMania 2020 will be the 36th edition, there are biggest fight including Randy Orton to face Edge, who make a return in a single competition last man standing. The WWE champion Brock Lesnar to defend his title against Drew Mclntyre, who won 2020 Royal Rumble. AJ Styles battling Undertaker.

Yet there are many action to need to watch over the two night fight. You will find all the information you need for the biggest show of the year in this STAY AT HOME. No matter everywhere you are, You can watch WWE WrestleMania 2020 live on Zmaxx HD channels and live stream.

How To Live Stream WWE WrestleMania 2020

No matter where you may be find yourself, You can stream WWE WrestleMania 2020 live on WWE Network, and it is available across all the streaming devices as following:

How To Watch WWE WrestleMania 2020 on Zmaxx HD Live

Good news to WWE fans in Africa, Middle-East and Europe, You can watch every action of WrestleMania 2020 live on Zmaxx HD pointing your satellite dish to Eutelsat 9A at 9.0e. Make sure you have satellite receiver like Tiger M5 Super with active Ferrari server to power on the channels. Like wise, you can use Icone CCCAM to open the channels for free.

It really worth to have Zmaxx HD channels as a wrestling fan. You can also watch replay of past events every night kicked-off at exactly 11 pm (WAT).

As you watch WWE WrestleMania at home. Your life is precious gift, stay protected, stay home, stay safe, don’t forget to wear mask, social distancing, and report if you have any kind of symptoms relates to Covid-19. For more details and get update visit coronavirus.gov. Together we all fight this pandemic.