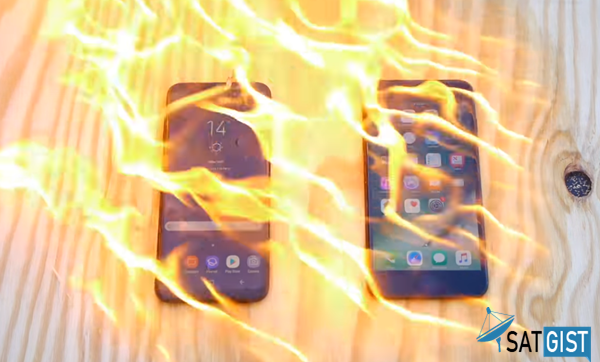 In the year 2016, exploding phones become head news across the social media most especially Samsung Galaxy Note 7. Later on, It was also reported that iphone users experiences the same severe. Samsung recalled Galaxy Note 7 smartphone after reports it got overheat and even explode while using it. Obviously, There will be major causes or reasons why do phones explode and how to prevent it? samsung Galaxy Note 7 isn’t only exploding phones. iPhone X also reported explodes too.

Whenever a phone burst or explodes or catches fire, it usually undergoing a process thermal or heat changes in the battery. Lithium-ion battery features with many Li-ion cells, Whenever there’s increase in temperature at optimal level caused by the damage, external heat, overcharging and poor manufacturing. exothermic breakdown occur simply because, The cell itself releases heat to the surrounding.

Heating can also arise within the battery itself caused by other components inside the phone, which is the root causes of “battery cell flaw” in the phone like Samsung Galaxy Note 7 and iphone.

Donal Finegan in Paul Shearing’s lab at university College London (UCL) says that when the particle in a cell moves around, the electric insulating layer can break and thereby causing short-circuit that creates little spark inside the battery which is enough to accommodates thermal snowball effect or thermal runaway process.

Avoid Leaving Your Phone Inside The Car

Too much heat destroy a battery, along with other components in a car that also generate heat, at the same time, it extends to phone batteries issues. whenever a Lithium-ion battery discharge at critical temperature while in a car or outside, its cells become a little unstable. It can cause exothermic breakdown, short or produce Carbon dioxide and oxygen. These gases will make the battery to explosion like a flamed petrol tanker.

Most of the phones free from battery issues shut down itself or stop charging when there is high temperature in the surrounding. leaving your phones inside a hot car for days won’t probably explodes. Thermal runway usually caused the battery to break before it get chance to explode. every Lithium-ion batteries features with in-buit safety components that prevent permanent short and pressure buildup. Though that these features will eventually kill your phone.

Exploring follow-come charger or use any charger from the reliable and certified company or chargers that recommend by your phone manufacturer. Cheap and un-certified chargers probably cause excessive heat and destroy phone’s battery. Your phone might got damage as a result of this slow-forming mechanical even before your expose to fire.

Cheap Charger won’t cause an explosion and overcharge your phone. Every phones has in-built voltage regulator that prevent overcharging any other issue arise for the battery to handle. however, I doubt that this features may be absent on the exploding phones.

you can search online or probably contact your manufacturer company and request for charger replacement. iphone user can go for MFI-certified and Qi-ccertified (wireless charger).

Avoid Dropping or Stabbing Your Phone

If you’re breaking your phone for fun or remove components and Lithium-ion battery is physically destroyed. And It usually follow up with short circuit, release gases and explodes at that moment. Well, you don’t need to watch much about it. Screen or display panel probably break before the battery damage.

Problem occur when Lithium-ion batteries that contains Lithium and Oxygen react when the electrolyte solution of both elements is ruptured which cause exothermic breakdown and thermal runaway.

One needs to be very careful while replacing phone’s battery. Bending a Lithium-ion battery during fixing or repair can cause mechanical failure. Battery can catch fire if isn’t properly handle during fixing or repair. Some Apple store recently successfully deal with fires during fixing and replacing iPhone 6 batteries. There’s chance for your phone to catch fire if the battery replacement held in un-certified or unreliable shop. As a woman’s iPhone caught fire at one un-certified shop.

In any circumstances, don’t expose your battery to fire or stab battery for fun. It will be very dangerous to your health and to avoid explosion. Toxic gases escape by burning Lithium-ion battery which is dangerous to our health.

Built-in safety features prevent many problems that might be arise such as battery-bursting, overheating, overcharging. Also Slow-forming Mechanical failures try to break battery before it cause thermal runaway.

Manufacturing process can determine the phone’s to get explodes and there’s nothing you can do as a user. Lithium-ion battery is made up of unstable metals, cobalt, nickel and graphite. Short circuits and explosion can be arise when equipment is expose. And there’s deposit of contaminate metals on the equipment during manufacturing process.

Bad assembly cause phone explosion, like a satellite dish antenna or a car, Lithium-ion battery are welded with pieces of metals. It can cause electrical resistance that generate heat, short circuits and mechanical flaws.

Honestly, phone explosion are extremely rare, Samsung exploding phones common to Note series. Less than 100 pieces of Samsung Galaxy Note S7 exploded, caught flame and overheated. About less than 1% of about 2.5 million Galaxy Note S7 that the company send to stores. The company try to prevent the flaws to going higher. I will advice you not drop or stab your phone as it may cause slow-forming mechanical failures. Also try to explore certified charger and don’t leave your phone in the hot car. If you find this article interesting, Don’t forget to share with your friend and family. Also share on social media.