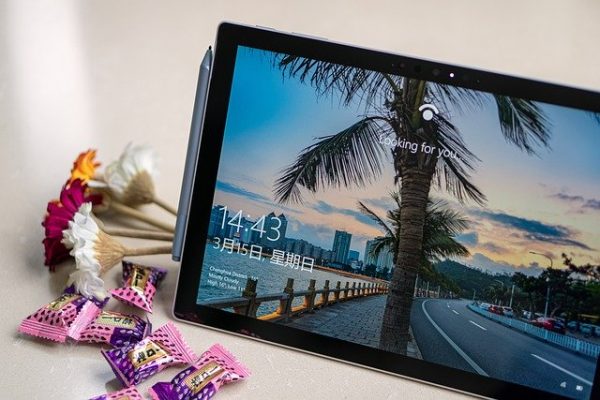 If you remember our post covering the most innovative laptops at CES 2020 in Las Vegas. You’d know that there have been quite a couple of competitors featuring foldable laptops. Foldable laptops already had a working prototype – and frankly, we were surprised seeing laptop screens that can fold.

But these laptops require software and OS that will be able to handle the folding ability, while displaying and keeping everything in proper order. Microsoft has jumped to the offer by agreeing to work further on their Windows OS, and to make it compatible with the most innovative trend of laptops ever – foldability.

We were able to see some working foldable laptop prototypes at CES 2020. But to be honest, not all of them were working “properly”.

Everyone was able to fully experience the foldability part of the newest wave of folding laptops. However, things were not really working out when it came to software. This is okay since the main purpose of prototypes was to show the main feature of the newest trends.

But we were really eager to see these foldable laptops in action! That’s where Microsoft steps in with its announcement to specially customize their most famous OS Windows 10. Microsoft has said that they will strip Windows 10, and rebuild it in a way to fit folding laptops that will eventually be able to work as a laptop featuring 2 displays.

Such a special OS version will be called Windows 10X, and it will only be available for foldable laptops. But how will this OS rebuild and optimization correlate with software available for Windows 10 operating system?

This is one of the questions that might make everyone think that Microsoft is taking a huge gamble doing this. But let’s start with two of the main foldable laptops that will be one of the first ones to run Windows 10X.

Surface Duo and Surface Neo are two of the most serious folding laptop prototypes, that will be release soon for sure by the end of 2020. We are pretty sure that these two laptops will be the first two folding laptops to run the Windows 10X version, if all things go through.

However, the software isn’t the only gamble Microsoft is making. Surface Duo is actually suppose to be a smartphone which will operate a fully working computer system. It will make a laptop in the size of a smartphone.

Surface Neo is suppose to be a tablet that will also be able to run a fully working version of the computer Windows operating system. Therefore, this will basically be a tablet working as a laptop.

Microsoft had success with Surface Pro 2-in-1 tablet/laptop and yet they’re taking things to a different level. Are they really going to pull this one through? Are these the type of laptops that will win over ultrabooks that can be future proof for over 10 years?

Windows phones didn’t really take off due to a lack of apps supporting their new software. Did Microsoft learn from their mistakes or will something like this happen again?

Will Microsoft’s Risk Pay Off?

Microsoft is fully into innovation and this can be observe from two different sides: risk or reward. Yes, it’s true that Microsoft has a lot to lose if things don’t go as planned. But they have a lot more to win if things go as planned.

Microsoft has made very few mistakes, and they’ve had many wins. Judging by their almost flawless performance, we believe that they’ll do well. Hopefully, they’ve learned from their mistakes, and even if not all of the things work out as planned. Microsoft will still win at quite a lot.

Their Windows 10X version is happening for sure and it’s going to provide a fully working system for folding laptops. This means only one thing. All manufacturers who decide to follow the trend and produce folding laptops. They’ll most likely decide to rely on Microsoft’s updated Windows 10 OS for no errors.

It was a really great phone. And the only reason it failed was the lack of support of the apps suitable for their new system. Even though that was the moment when Microsoft stopped battling in the smartphone industry. They were able to develop one of the best GPS apps – HERE We Go.

This app is now being used worldwide by people and drivers on all smartphone operating systems. And yet not many people know one thing. This app was developed from the initial maps app in Microsoft’s first smartphone OS. Featured exactly in Nokia Lumia 800 – a phone that was considered a fail.

We are really excited about Microsoft, and we believe that these innovative moves will help them dominate in the following decade – one way or another.

What do you think about Microsoft’s most innovative decisions? As it looks like – they are working on changing the way we use laptops. But also on the way we use our smartphones & tablets.

Do you think that Microsoft will be able to pull this one off. Even though some of the odds seem to be pack up against them? We are really supportive of Microsoft and even though it sometimes seems that they’re working behind the scenes without many innovations. They’re still keeping up with the technology in many different areas.

But here’s one question for you. If Microsoft was able to pull this off – would you purchase a Surface Neo or Surface Duo. And see how far the most innovative ways of using a laptop would take you?

We weren’t thinking that laptops would change drastically in just a couple of years. And all the way from prototypes to almost fully working folding laptops with Microsoft backing them by providing a special version Windows 10X is just amazing progress.
Are you looking forward to the folding laptops and the newest Microsoft inventions?
Feel free to leave a comment down below and let us know your thoughts! We’d love to hear from you!

As far as the video game consoles industry is concern, The top three major players i.e Microsoft, Nintendo and Sony reacted and send warning to U.S government on the cause of its attempt to increase the tariffs on the gaming industry.

U.S government allowed public to post their opinion on the its proposal of a 25% increment of $300 billion in tariffs put on all goods manufactured in China following an open letter released on June 17 sent to the representative of the U.S government.

Others consumer electronics like TV’s, Smartphones, video game consoles manufactured by Microsoft Xbox One, Nintendo Switch and Sony Playstation 4. These three company explain furthers in the open letter and make it clear that Video games are important and has become one of the core American Entertainment Culture.

According to 2015 Essential Facts About the Computer and Video Game Industry, Explicitly stated that 42% of American plays video games i.e more than 3 hours per week. It furthers explain that two or three households own at least one video games player. The rate at which every american play video games daily will soon rise up to 60% and above.

Impacts Of Tarrifs On American Economy And Video Games Consoles

The three companies explains further in the open letter sent to U.S government and claimed that the cost increment of 25% tariff will make it new release video game consoles unavailable in american market as we approach to the end of year holiday. The consumers would likely to pay $840 million for consoles despite tariffs.

It also reported that more than 96% of all the game consoles in the America in last year were produced in China. given the belief firmly established and already tight side of such productions. any adjustment in this action would cause notable increased price of the products, which would directly put on to the shoulders of the american consumers.

The letter goes on to and claim that the taxation changes would cost high-value, Jobs at risk and obstruct innovation in gamers industries. And later would definitely caused negative impact on the overall American economy.