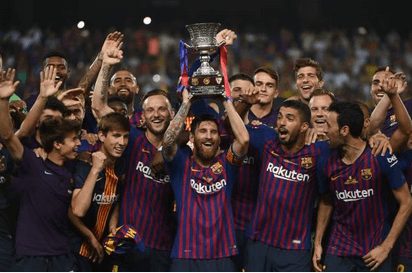 Spanish Super Cup 2020 season suppose to have started before now, but due to the reason that Spanish Football Federation has moved it to January. This season Super Cup will host top LA Liga champion (Barcelona) and Copa dey rey champion (Valencia). It also featuring Real Madrid and Atletico Madrid who made it to top three in the standing of the last season.

In this article, I will show you how to watch and live stream Spanish Super Cup from anywhere. Before we move on, there some details you need to know about Spanish Cup. Let’s dive in!

The tournament will first held outside Spain but in Saudi-Arabia in a three years deal worth 120 million euro. All the Spanish Super Cup matches will be watch and stream live from King Abdullah Sport City (Jeddah).

This one-off chance matches, only serious team made to the final, as there’s no third-place.

Well, Middle-East and North Africa are favorite to watch Spanish Super Cup 2020 on many satellite channels across the region with paying a single penny, it’s absolutely free-to-air. The following Channels are available to watch Super Cup live and exclusive with Arabic commentary.

All these satellite channels are available with minimum of 60cm dish and above in the region.

Only Canalsat Africa has official tv rights through out the Africa. LA Liga fans may subscribe to the sport package to Canalsat Africa if you already owned a decoder. Otherwise you can purchase Canalsat Africa decoder packed with 1 month free subscription to watch Spanish Super Cup.

As at the time of writing this article, no single free-to-air is available to show the match. Though Yayi-tv may show the live matches to their subscribers though they’re not official in Africa.

Possibly, New Sport and Signal-6 on Eutelsat 10A at 10E (C-Band) or wide band may also showing the matches even though there’s no official advert on their channels. Satellite enthusiasm may also set their eyes to watch Spanish Super Cup on the channel.

In US and Canada, ESPN Deportes and Bein Sport USA hold the official tv right to show the tournamnet in the region. Also DirecTV Sports Caribbean will delivering live coverage in North and South America.

How To Live Stream Spanish Super Cup From Anywhere With IPTV

No matter everywhere you are, you can watch and live stream Spanish Super Cup 2020 with ESPN streaming service. You can also opt for MYHD IPTV or DStv World IPTV subscription, which host more than 10,000+ channels.

Sometimes, you may experience blackout of geo-blocked coverage. Then Ivacy VPN will get you cover to unblock IP’s address and make you appear online as you reside in the supported countries..

Once done with the configuration and sign in, there’s streaming dedicated server which host many online streaming channels. from there you can live stream Super Cup. Anyway for those residing in Nigeria, There’s secret unlimited GLO data plan which you can use to browse and stream without data. It’s truly unlimited with affordable price with instant activation just hit my contact to get yours.