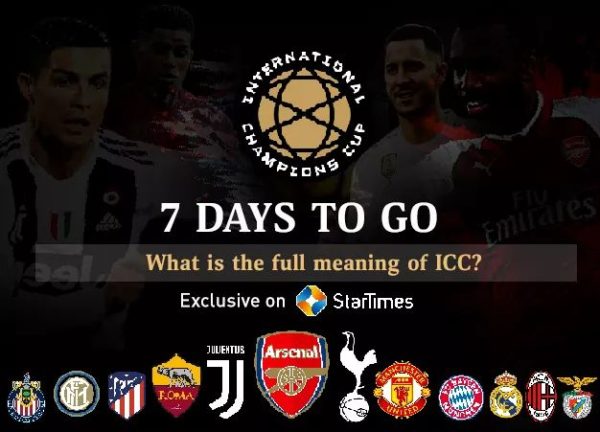 The 2019 International Champions Cup (ICC) will be played in different regions which Includes Asia, Europe And America. However, Africa and Australia were left out. About 16 venues will be use across the continents for the 2019 International Champions Cup (ICC). And this year edition will mark 7th edition of the ICC powered by football association.

ESPN owned the TV rights to telecast International Champions Cup (ICC)in US. The monthly subscription is cheap when compare to Fubo TV and Sling TV. Likewise DAZN will be showing the match in Canada. If you have any free streaming mobile application features with ESPN, You can tune in and start watching.

In UK, Premier Sport will be showing all the top Club football 2019 ICC pre-season tours matches. While Germany, Austria, And Switzerland, Sport 1 will do justice to offering live broadcasting of International Champions Cup (ICC) via their official website or any other streaming mobile apps features with Sport 1 channel.

Either you are from Australia or Africa most especially Nigeria, And you want to watch the football pre-season matches, Then I will recommend MYHD IPTV if you owned supported devices like Tiger receiver or Starsat or Mediastar or Android TV box.

How To Watch Football Pre-Season On Satellite TV From Anywhere

StarTimes is the official broadcaster of the International Champions Cup (ICC) in Nigeria. You can watch the all the 18 games live and exclusive on Startimes satellite TV cable or Terrestrial and StarTimes ON App. Visit their official website for subscription or use quickteller to make your payment with instant activation.

As far free-to-air channels are concerned, There are some free-to-air channels that will broadcast 2019 International Champions Cup (ICC) such as Israel Yes tv using Yes Sport 1 on Amos 4/7 at 4w. Also you can point your dish to eutelsat 9a at 9e (same position as AFN Sport) to get Sport 1(Germany) for all the game on Satellite TV cable. To learn how to watch 2019 Football Pre-season via Eutelsat 9A at 9e read this.

Give Away Or Gift Box For 2019 ICC Football Cup

For watching Football pre-season or International Champions Cup (ICC), Satgist has provided a way for you by purchasing our android tv box fully loaded with IPTV services. Our IPTV services is free from hacking or advertising links or pop up. It features with many channels from US, Canada, Germany, UK, Iran, Pakistan, Indian, Nigeria, UAE, Albania, Switzerland, Australia and so on. The give away box is affordable you can contact me for more details or to place order.