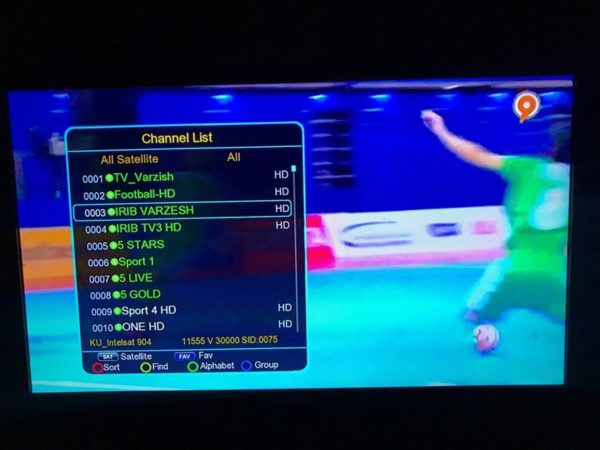 This December a lot has happened in the field of Satellite TV. Today I will be giving updates on Satellite TV World involving MKSport on Yahsat 1R at 52.5E And IRIB TV3 on Intelsat 39 at 62E. I will also extends this article to give you the updates Forever Server Pro 129, Nashare Server Pro and Glo Unlimited data to stream live events for those that have streaming device with active subscription.

Let’s move on explain in great details what today’s post all about.

MKSport is belong to one of the digital television service in the Middle-East. It shares the same frequency used by Royal News. MKSport is the latest sport channels operating on Yahsat 1R at 52.5E.

Like I have said earlier, The Satellite TV signal coverage covers all the Middle-East. In Africa the signal footage touches Ethiopia, Egypt, Sudan and Somalia. It is very easy to nail this bird with minimum of 60cm dish above.

According to Wikipedia, IRIB TV3 is one of the 32 national television channels created by Islamic Republic of Iran Broadcasting, and it is the third channels on the list. And Varzesh TV is number 14 on the channel list.

Satellite Coverage And Frequency For IRIB TV3 And Varzesh TV

Top Satellite Receivers manufacturers like Tigerstar, Mediastar, Starsat, Geant, Vision, Ghost, Premium and so on have released software updates Forever Server Pro.128 to Forever Server Pro.129. New software is underway to fix BISS Key algorithm and add 6 month free apollo iptv all existing supported receivers for new year gift. So if you have not yet upgraded your receiver you better upgrade before the offer ends.

It seems Nashare company really mean to do business. The company has roll out Nashare Server Pro to fix bugs in ordinary Nashare Server. All the sunplus manufacturers has also released new software to add Nashare Server on all sunplus receiver most especially 1507G chips.

One of the core Fixed features on Nashare Server Pro is instability while watching OSN package, Digiturk, opening Ptv Sport and others. If you own anyone of these sunplus receivers you can try to updates to the latest patch.

You can dust your android tv box or streaming devices as there’s hottest unlimited internet data across the internet. The Glo data is fully unlimited and affordable, no data caps and it compatible with all the internet enabled devices.

As the holiday is around the corner, then Unlimited Glo internet data will make your holiday interesting. You can stream live sport events and watching movies. Contact me to place order for your Glo Unlimited data at affordable price with instant activation. Please avoid streaming movies from fake websites as warned by cyber security company. If you find this article interesting, don’t forget to share with your friends and across social media! Thanks and stay bless.