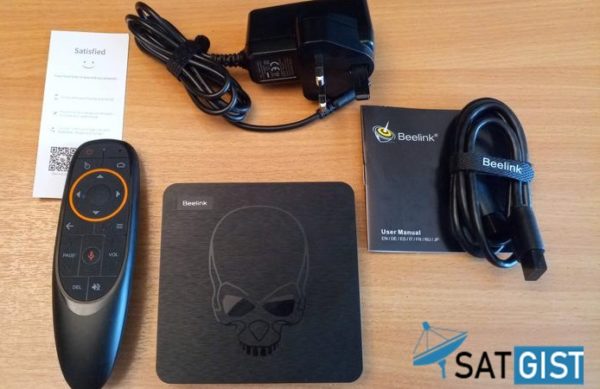 Here is another episode of Android TV box review, Today I’m going to review Beelink GT King Android TV box to you released last month, The hardware impressed and robust features with many options which satisfy almost all the Android TV Box users, Let’s Proceeds to do the review.

Beelink GT King Android is a small square TV Box with a skull drawn on the top with eyes glow up green when power on, The GT King TV Box has no rubber pads on the bottom which does slide around the table a little bit. Still in bottom side, No ventilation holes for heat passage and there’s a recovery button hidden behind the bottom case.

The Air Mouse is very Portable with curve edge at the bottom for easy handling while on the top left hand corner is where the mouse piece located for voice control or search.

Beelink GT King is 4GB RAM powered by Amlogic S922X Chip equipped Quad-core processor, Arm Cortex A73 and Dual-Core Cortex A53 without the exception of Mali-G52 MP4 GPU for fast operation without no lagging.

Using the TV Box through out the day to watch movies, Streaming live matches and playing games for may hours, yet, Beelink GT king TV Box temperature was 36.9C as a result of the heat sink available inside the box which has battery under along the LED module for skull eyes to display green while power on.

GT King TV Box is super fast boot up and all app load fast and nice, Beelink GT King running on Android 9.0 Version, It has a very good operating interface with cool color after the boot up.

Consequently, you may be looking around for the solution if your TV Box fail to boot up and here are the requirement you need to flash your TV Box

Beelink TV Box is a very nice and cool because of the stated features above but during the test, I found out that webcam and view games not working, hopefully with the help of feedback from the end users Beelink company can improved and released the Beta firmware version that will fix this issues or any other related bugs.